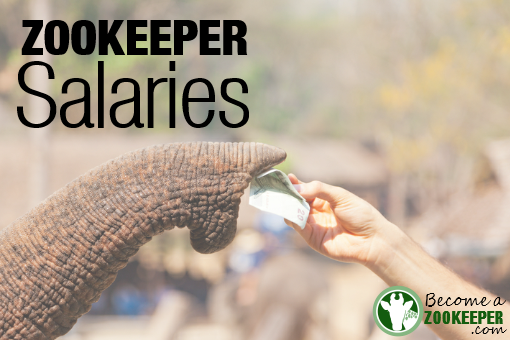 You may have already gotten the impression that zookeeping is a job you do for love, not money, but I bet you still want to know how much a zookeeper gets paid. Zookeeper salaries are a bit tricky to pin down, not just because they vary from zoo to zoo, but because workplaces generally aren’t that willing to share these sorts of details. Nevertheless, we’ll do our best to bring you what we can.

The figures that follow should be used as a guide only.

The UK’s National Career Service lists zookeeper salaries as starting at about £13,000 per year, while senior keepers may earn from around £17,000 to £24,000. For some real-world examples check out the current vacancies on Chester Zoo’s website; they tend to include the yearly salary for each position listed.

In Australia, zookeepers are paid under the Amusement, Events and Recreation Award, so check out the Award for the most up to date details. To give you a guide though, it starts from about $34,000 for new keepers and goes up to around $50,000 for more experienced keepers.

We’ll keep researching zookeeper salaries and we’ll bring you more information when we can.